Last week I was invited to speak at the Glendale Community College (GCC) Science Lecture Series.  These talks are held on a regular basis on campus, during the fall and spring semesters, thanks to the sponsorship of William Gohlke, in Memory of Ole W. Gohlke and Stephanne A. Gohlke.

The title of my talk was VERSATILITY of a STEAM DEGREE – My Path into IP Law.  Before I dive into the talk itself, I wanted to thank Nare Garibyan for organizing this event and inviting me to participate. She did a great job of introducing the topic of STEAM and even had a few surprises for me. 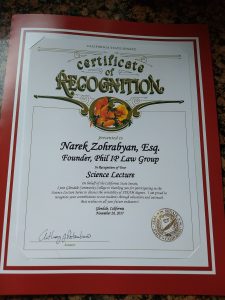 Before the talk began she announced that there were representatives from State Senator Anthony J. Portantino’s office and State Assembly member Laura Friedman’s office, who presented certificates of recognition in honor of my participation in the Science Lecture Series.  To top that off, Nare also presented me with an honorarium award.  None of which I was expecting to receive, but nonetheless I am very grateful for all the accolades.  Thank you once again!

A few months prior, Nare had approached me about the idea of giving a talk at GCC.  The concept was to come in and talk about my job as an IP (Intellectual Property) lawyer, my career path, educational background, and tie it in with the science fields.  After thinking about how I would accomplish this, I agreed to work on a presentation.  Along the way however, the talk went through multiple iterations.  Nevertheless, the final talk evolved and incorporated a section about different career options in STEM (Science, Technology, Engineering and Mathematics) and also the idea of introducing the concept of Arts within the STEM disciplines. 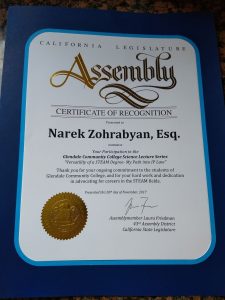 Interestingly enough, some audience members were unfamiliar with the use of the acronym STEAM, even though they had been readily exposed to the concept of STEM.  The addition of the “A” (A for Arts) into STEM is a growing movement within some academic and educational policy circles that proposes the idea of including the arts along with the more analytical pursuits (aka STEM).  I certainly had not delved into this issue but had to do some research in preparation for the talk.  Throughout this process I learned how early involvement in these creative activities, whether it is music, writing, painting, arts and crafts, or drama, etc.., helps a person achieve better career and business footing in their adult lives.  For example, there are studies that show a link between participation in arts & crafts activities at an early age to patents generated and businesses launched in their adult years.  Some other studies show that involvement in music strengthens learning [1] and memory [2], that it increases verbal intelligence [3], raises IQ and academic performance [4], and is associated with cognitive gains [5].  With the same light, involvement in the visual arts improves connections in the brain [6], and mindless sketching or “doodling” [7] can help with focusing.

My personal background of classical music training, although anecdotal, has helped to bridge both the analytical and creative parts of my brain.  Therefore, I’m all for integrating more disciplines into the traditional STEM fields because I think it is incredibly important to have an interdisciplinary approach to any field of endeavor.  It is even more important to adopt this view because since the 1980s, the funding for arts, music, and creative skills has been continuously decimated from our primary education system.  This void has left students to look elsewhere for exposure to these skills or alternatively, it has dis-incentivized the pursuit of these fields entirely.  At the same time, there has been a push to focus on the more analytical types of disciplines such as the ones covered by STEM.  The fascination with STEM geared pursuits is of course justified given the potential of adding jobs [8] and greasing the economic engine [9] of not only this country but others’ around the world as well [10].  For example, IP (Intellectual Property), which includes the areas of patents heavily dominated by the STEM fields, contributes to about 40% of the U.S. GDP (Gross Domestic Product).  Some 46 million jobs depend on the IP sector directly or indirectly [11].  However, it is not wise to solely focus on the STEM fields to the detriment of the arts, music, drama, and the creative pursuits because they are integral part of inculcating problem solving and critical thinking skills.  Furthermore, these creative pursuits also have a significant impact on the economy.  A recent report suggests that about 1.6 million jobs and a $407 billion economic activity in California was attributed to these types of skills [12].  The founders of this country sought to protect the intangible properties produced by its citizenry and they enshrined in the US constitution the protections laid out for copyrights and patents.  In Article 1, Section 8, Clause 8 of the US constitution it states:

“To promote the progress of science and useful arts, by securing for limited times
to authors and inventors the exclusive right to their respective writings and discoveries.”

What the authors of this document had in mind with the term “useful arts” was the creative and expressive works such as painting, sculpture, music, publications, etc., in other words, the creative pursuits.  This would be known as the copyright protection provided for the owners of such works.  Although the arts in this case envisions copyright protection, it is nonetheless telling that the learned individuals of America’s inception had in mind the significance of these types of pursuits which gave rise to such a legal protective measure.  It is in this context that I think the creative pursuits should be taught side by side the STEM related skills.  Thus, one of the takeaways of my talk was to be less exclusive and to approach education with a more holistic view.  There lies the overall concept of STEAM.

The other theme, which was dominant in my talk, was the idea of choosing non-traditional career paths regardless if one decides to pursue a career in STEAM.  Throughout my education and professional journey, I have certainly met other STEAM focused individuals who took the nontraditional route.  Some went into law school and focused on public policy matters, some focused on contracts regarding buying and selling of electricity, and others used their technical backgrounds to prosecute white color and technology related crimes.  I, on the other hand, decided to pursue a specialization in IP law, for example, in the field of patent law.  This area requires some type of a technical or a hard science training because so many of the inventions deal with complex technological advances.  Therefore, it is important to keep in mind that even pursuing a career in STEAM will open up many more avenues to explore.  It is possible to pursue a career in business, law, or policy.  So I urge you to go out there and embark on an adventure!